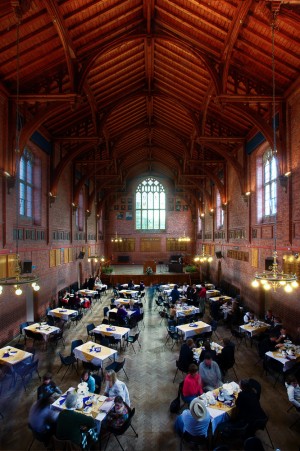 Set in beautiful Shropshire countryside, Ellesmere College provides a fully-rounded education for seven to eighteen-year-old boys and girls. Ellesmere's focus on excellent academic achievement for each individual pupil is complemented by a wide-ranging educational programme that offers excellence in sport and the arts. An Ellesmere College education combines a top-quality academic, sporting and cultural education with an exceptionally wide-ranging extra-curricular programme that develops essential life skills such as the ability to lead and work in a team.

On the sporting front, the School has a well-established rugby heritage which boasts former international players, including ex-England Captain Bill Beaumont and Martin Keyworth as Old Ellesmerians. Over the last five years Ellesmere has developed rugby talent through its Rugby Academy with a number of recent leavers combining their university careers with professional rugby club contracts and international representation.

Beyond rugby success, the School also enjoys representation at county, regional and national level for a wide range of other sports including tennis, netball, hockey and target shooting. Two years ago the Ellesmere College Tennis Academy was established and already has pupils with national LTA ratings; the School was one of eight schools nationally that qualified for the recent LTA National Schools U19 Finals with the Mixed Team finishing as runners up.

The summer of 2008 saw the foundation of the Ellesmere College Titans, an elite swimming programme, and more recently a Cricket Academy has been established. The Titans have a core group of very talented young swimmers who are forging ahead with their development and succeeding significantly at both local and regional competitions; the Titans do not swim against other schools, but instead compete in the adult National Arena Swimming League, in which they have enjoyed successive promotions and will swim in North Western League One this year. This summer term sees the return of a professional golf coach enabling children of all ages to learn to play on the School's 9-hole golf course.

In September 2010 the School will be launching its Shooting Academy. With a long history of Combined Cadet Force involvement and having both an indoor and outdoor shooting range on-site, target shooting has been part of the extra-curricular programme at the School for many years. Both former and current pupils regularly represent their Country at international competitions. Recently archery has been added to the range of activities on offer and the School has acquired two new shooting coaches.

The excellence of the cultural and artistic activities at the College match the sporting - although being usually non-competitive have fewer opportunities to hit the headlines. The College's Arena Arts programme offers the opportunity for achievement - often outstanding - in visual, media and the performing arts with pupils offered regular occasions for performance at a very high standard.

A steady and consistent growth in pupil numbers over the last thirteen years has seen the school grow from 320 to 610 pupils. This business success has enabled the College to invest for the future, and in 2008 74 acres of adjacent land was bought, doubling the size of its grounds to 144 acres. This will create the opportunity for the School to have more playing fields and, in the longer term, to move and re-design its existing golf course as well as having the space to build a new girls' boarding house and additional teaching facilities.

With academic, music, drama, sport and all-round scholarships on offer, as well as means-tested bursaries, families interested to learn more about the College's strong focus on individual development are very welcome to join pupils, their families, staff and former pupils at the School's forthcoming Open Day on Sunday 9th May, between 1pm and 4pm.