International Admissions
< Previous  |  Next >
Home   >   News   >  Ellesmere College: making a difference and bringing the generations together.

Ellesmere College: making a difference and bringing the generations together. 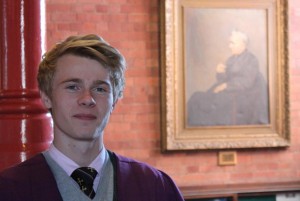 Ben Hall, a pupil at Ellesmere College is an inspiring example of the support and opportunities available to students through the global network of Old Ellesmerians.

Ben who lives in Baschurch attended The Corbet School for his secondary education and had a passion for science, but at the same time loved writing and the arts. So to say he had trouble deciding on GCSE options, let alone a career. Ben hovered between wanting to pursue engineering, theoretical physics, biochemistry or medical journalism before finally settling on medicine.

In an impressive set of GCSE results Ben achieved 7A*s, 4As and a C in a Critical Thinking A-level. Whilst in Year 10 he was introduced to Ellesmere College at a higher education evening at The Corbet School where he soon realised that Ellesmere far exceeded other sixth forms he had seen, particularly with the combination of academics, sport and the arts. He was further convinced by the scholarships and bursaries that were available to him and to other local students.

Ben was nominated for, and won, the Silver Cross Academic Scholarship, which was created by Mr. Alan Halsall, himself an Old Ellesmerian, who committed to support and mentor Ben through the two years of his Sixth Form education.

"I know, commented Ben, that without the support and encouragement of Mr Halsall, I would not have been able to attend Ellesmere College. The opportunity he has created is fantastic and I hope that the tradition of Ellesmere Alumni funding scholarships and mentoring students continues for many years to come. It is totally life changing."

Ben has embraced every element of student life at Ellesmere, taking part in inter-house sporting events such as hockey, in which he represents the first team. He has won many writing competitions and attended Oxford for a three day Biology Master class which has had a significant influence on his career choice to be a doctor. Whilst at Oxford Ben sat classes on higher level biology and then went through the reputedly unique 'Oxford interview' for medicine. For the past year he has also volunteered at the Royal Shrewsbury Hospital as part of his Gold Duke of Edinburgh award.