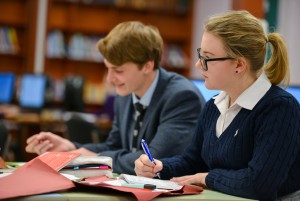 To celebrate the 50th Anniversary of the International Baccalaureate (IB) Diploma qualifications worldwide, and more than 10 years of IB success at Ellesmere College, two IB Anniversary Scholarships are being offered.

The new scholarships will be open to pupils who will have completed their GCSEs this summer and want to be part of the new Lower Sixth IB intake in September 2019.

Headmaster Brendan Wignall said: "We have had many years of IB success here at Ellesmere College and it is a path many students want to take. IB Diploma graduates are welcomed by the world's leading universities, it is the qualification for the 21st century - where young people are competing for work in a global society. The college and governors believe this anniversary is the perfect opportunity to ensure more people have access to these global opportunities and can complete the programme here at Ellesmere. As the only school in Shropshire and one of only several schools in the whole of the North West to offer the IB, we are delighted to be able to award these new scholarships, alongside the many other scholarships and financial support we have on for students."

"Although there are only two places officially offered in this programme, further offers may be made if the right candidates are identified within this selection programme."

The IB was introduced at Ellesmere College in 2006 to widen global academic opportunities for students.

The two-year programme of advanced academic study offers a broader curriculum than A-Levels, encourages independent learning and is widely respected by universities worldwide, because of the range of skills it develops.

"Research has shown that IB Diploma students are more than twice as likely to enrol at one of the UK's top 20 universities, are nearly twice as likely to succeed in application for courses in medicine and dentistry, are 30 per cent more likely to a gain first-class honours degree and have a significantly higher starting salary after university," Mr Wignall added.

"We want to ensure all pupils and prospective pupils are aware of the opportunities and different types of qualifications on offer. These new scholarships are a way to do this."

For more information on what the scholarships have to offer, click here: IB Anniversary Scholarships

The college will hold interviews with prospective students from February 4.