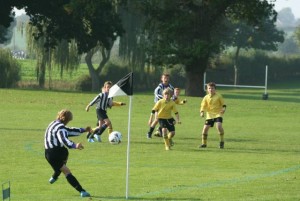 After a particularly busy Open Day on Saturday, a further 80 families visited the School for the annual Under 11 Six a Side Football Tournament.

With a total of 14 teams participating, including the Ellesmere College A Team, there was much strong competition from the start. The sun shone as the teams battled it out for places in the finals. It was a penalty shoot-out that eventually saw Birchfield School, Wolverhampton, being the victors after a thrilling final match against Terra Nova.

Ian Williams, Director of Sport, commented, 'The weather could not have been better and the standard of play was particularly high this year. We were delighted that so many local schools were able to field teams to participate in this annual football tournament.'