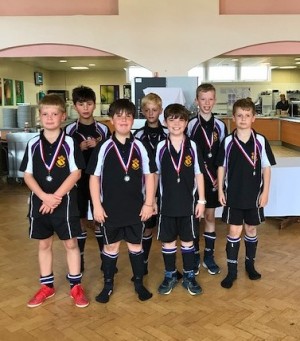 Last Sunday, Ellesmere College and 9 other local schools participated in the annual Under 11 Six-a-Side Football Tournament!

With a full afternoons programme of football ahead of them, our players did exceedingly well in the group stages, winning three out of four group matches and finished at the top of their group amidst some strong competition. However, the team's dedicated efforts left them tired, and this showed during the semi-final where they were unfortunately defeated 6-1 by The Firs School and eliminated.

The Firs School and Abbeygate then squared off in a nerve-wrecking final, where Abbeygate claimed a 4-3 victory, winning the tournament.

Ellesmere battled it out for third place against Shrewsbury High, who they had already beaten 1-0 during the group stages and it was all a match should be - tense and thrilling! - but Ellesmere's resilience saw them cinch another 1-0 victory and rightfully earn the third place spot.

A special mention to our Ellesmere Sixth Form students who were brilliant in refereeing these competitive matches, and all teams could be commended for their sportsmanship and effort!

Director of Sport at Ellesmere College, Mr Ian Williams, reflected on the tournament, "Well done to all the boys who played on a great afternoon of football that was praised by all of the schools and parents who attended, and a big thank you to all the parents, supporters and volunteers who make these events so special for all the schools involved."