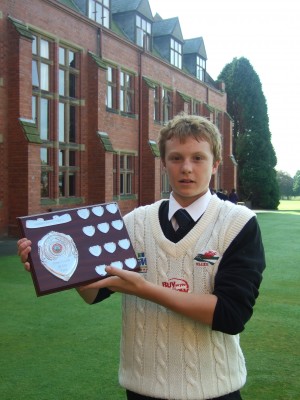 A talented young cricketer from the Ellesmere College Cricket Academy has recently been named North East Wales Young Player of the Year.

Dewi Jones, who joined the School in Year 10 as a day boy, was previously a pupil of Ysgol Morgan Llwyd School in Wrexham. Whilst continuing to play for Brymbo Cricket Club, he also is an Ellesmere College Cricket Academy Scholar. As a successful batsman, with a high score of 63, Dewi represents North East Wales at county level and Wales at national level.

Rod Jones, Director of the Cricket Academy, commented, 'We are delighted that Dewi has joined the School and we look forward to helping him further develop his cricket talent.'