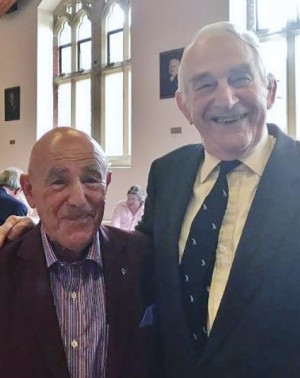 Ellesmere College recently held a service of celebration to mark the 50th anniversary since the reopening of St Oswald's Chapel following a major fire in the mid-1960s.

Former Ellesmere College Headmaster, Mr Ian Beer MBE, attended and spoke about the place the chapel has in the hearts of all those connected with the College and the role it continues to play - inspiring and encouraging staff and students on a daily basis.

Nick Pettingale, Director of External Relations at the College, said it was a very important day and an emotional landmark in the chapel's history. "The chapel still plays a hugely significant role in the life of all those connected with Ellesmere College and anyone who has worked or studied here, holds it in the highest regard," he said. "Our present students attend services there twice a week; it is always one of the first places that visitors want to see and is high on the list of priorities when our Old Ellesmerians make a return visit. The anniversary celebration was well attended and Ian spoke warmly and affectionately about the chapel in his address."

The present chapel was designed in 1926 by Sir Aston Webb and only finally completed in 1959 due to limited resources through the 30's and 40's. The building was gutted as far as the Chancel Arch in the fire of June 23, 1966. Fire damage meant that all woodwork, with the exception of the roof timbers in the Lady Chapel and cupboards in the Choir Vestry, had to be replaced.

The Ellesmere College chapel plays host to a number of special services each year, including the Remembrance Service Eucharist and Community Carol Service when we invite local communities to us join for our candle-lit service.

The service was followed by a luncheon for Old Ellesmerians at the College.