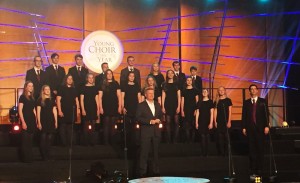 The sweet sounds of Ellesmere College Chamber Choir will be heard across the UK next week, when they perform on BBC Television.

The choir comprised of students from Ellesmere College took to the stage at the televised recording of BBC Young Choir of the Year at the Pontio Arts Centre in Bangor. It was recorded on April 22 and will air on Sunday May 6 on BBC One in the usual Songs of Praise slot, when the finalists will be revealed.

"The programme was presented by Aled Jones and Josie D'Arby, both of whom were wonderful to work alongside. They really helped to draw out the best in all of the choirs taking part and we had great fun along the way."

Kirsty Milburn, production co-ordinator for the BBC programme, said many of her colleagues commented on how 'professional, gracious and generally wonderful' the Ellesmere students were. She added: "They really were a credit to the college and should be so proud of themselves. I was very lucky to get to spend the day with you all!" Josie D'Arby said she was 'moved and impressed' when she heard the choir sing.

They submitted two pieces - Robinson's Poor Wayfaring Stranger and Byrd's Ave Verum - to the judging panel which saw them picked as one of five choirs to go to the semi-finals.

The inclusion in the BBC Semi-Finals follows successful performances in the Barnardo's National Choir Competition finals and a record year at the Oswestry Youth Music Festival with successes across all categories. The talented musicians from the school came away with 24 first places. Musicians from Ellesmere College have also recently been on an extremely successful tour of Italy with concerts and performances in Rome at St Peter's Basilica, The Pantheon, Palatine Hill, the Spanish Steps and in Southern Italy at Pompeii, Vesuvius and the cathedral at Ravello. And last week music scholar Seren Devismes sang her way to winning the Rotary Musician of the Year Regional Final - she will now proceed to the finals which will take place in Edinburgh in May.

"Choral music has never looked stronger at the college who are gaining a national reputation for excellence in this field," Tony added. "The choirs should be congratulated for their commitment to the competition and music at the college. They are equally comfortable singing classical and contemporary music, and now is a great time for talented singers to join the college and benefit from these kind of amazing and unforgettable experiences."

Anyone who wants more information should contact Tony by emailing tony.coupe@ellesmere.com