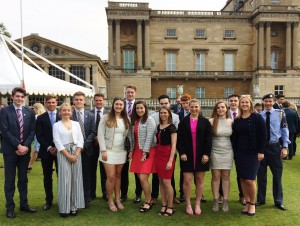 Past and present students from Ellesmere College attended Buckingham Palace on 24th May to receive their gold Duke of Edinburgh (DofE) awards.

Sixteen current and former students were among 3,000 people from across the country who picked up their awards at the event hosted by Prince Edward, a trustee of the awards scheme, and attended by fellow royals The Duke of Cambridge, Sophie Wessex and Princesses Beatrice and Eugenie.

Three current Year 13 students of Ellesmere College and 13 Old Ellesmerians received their awards from Princess Beatrice during a day that will be treasured by all those who attended for many years to come.

And there was more cause for celebration when Debbie Joynson-Brooke and her husband Frank Brooke were also presented with awards for 28 and 30 years respective service to the awards scheme. Debbie has been at the College for 20 years, involved in the Combined Cadet Force and is also currently the Director of Activities. 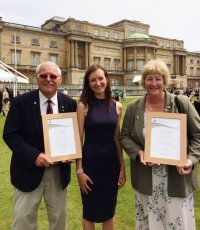 Headmaster of Ellesmere College Brendan Wignall said: "This was a wonderful day for all our students who took part in the scheme and obtained the Gold Award - it was an experience to enjoy and will live with those who took part for the rest of their lives. We are immensely proud of the achievements of all our gold award winners."

"The scheme is an asset to the growth and development of our young people across the country. Taking part strengthens character and provides a unique perspective and insight for those involved. It is amazing to think that this scheme helps to prepare nearly half a million young people for life and work across the country every year, we value it very highly here at Ellesmere College."

Since it was launched, about six million people have taken part in the Duke of Edinburgh scheme and nearly three million awards have been presented. The scheme was launched by the Duke of Edinburgh in 1956 and has grown to the point today where it is taken up by more than 10,000 institutions nationally each year, including schools, prisons and youth clubs. It enjoys the support of more than 3,000 partner organisations and some 40,000 adult volunteers.