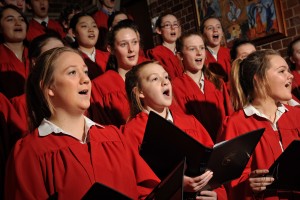 Ellesmere College has been flying the flag for Shropshire in two of the world's leading concert venues.

The Choirs at Ellesmere performed at the Symphony Hall Birmingham, for the Woodard 1000 Voice Concert on the road to the national finals of the Barnardo's Choral Competition, held at the Royal Festival Hall, London.

Following two consecutive years of students at the school reaching the national finals of the Woodard Schools Musician of the Year competition. Choirs from the Woodard Schools Corporation were invited to perform a range of music alongside Dominic Peckham, who is regarded as one of the UK's finest dynamic orchestral and choral conductors of his generation.

Director of Music Tony Coupe said, "It was great to have the opportunity to perform alongside students from across the UK and encourage new students to participate in music through singing. The Symphony Hall is one of the best concert halls in the world and this was an unforgettable experience."

On the 17th March, the School will travel down to London to compete in the Barnardo's National Choral Competition, which has grown from strength to strength. Attracting hundreds of entries from all over the UK. Ellesmere College submitted an audition performance of 'Fix You' by ColdPlay and Cy Coleman's 'Rhythm of Life'.

Both pieces were described by the judges of the selection committee as being of exemplary high standard. Choirs will choose one song to sing during the concert and the winning performers will be announced at the end of the evening.

This is a new chapter in the development of music at Ellesmere with students now accessing national competitions, Tony explains, "We are delighted to be able to represent the county in this event and support an incredible charity such as Barnardo's, who have helped millions of children affected by poverty and discrimination. Everyone is looking forward to singing on the national stage and we hope to provide the audience with a great performance."