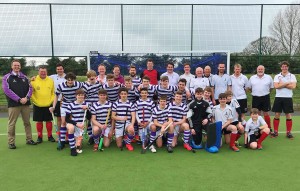 This annual match between Ellesmere College and Deeside Ramblers has been a fixture in the calendar for over 25 years and this season it did not disappoint. Ellesmere as a College have been searching for a victory over the local visitors for over two decades and they set off to a great start. An early goal with a superb ball across the pitch to Jacob, saw the ball go past the goal keeper. The Deeside team quickly responded with a swift goal, catching the home side off guard.

Ellesmere continued to play their passing game, creating many more chances in front of goal. Oscar, Jacob and even Mr Taylor bagged a goal to push the score line ahead. The goal of the day belonged to Sam Nieto, taking a last second head height deflection to guide the ball into the roof of the net.

The game was played in great spirit and the Ellesmere side were a true credit to the college. This was Ellesmere's year, with a fantastic group of players.

This victory came off the back of a fantastic boys hockey season including a number of convincing wins including the U18 game vs Welsh Champions - Rydal Penrohs.

The team sprit of the Ellesmere side was clear to see and the game saw a flurry of goals from the Boys in purple and white stripes - Sam Nieto, Patrick Crow, Charlie Sweeney and Jacob Popperwell all contributing with brilliant finishing past the Welsh Goalkeeper with finally Sam Nieto claimed his second of the game.

It would only be fair to say this was one of the best game the Ellesmere side has played this season. A fantastic team full of pride and passion.