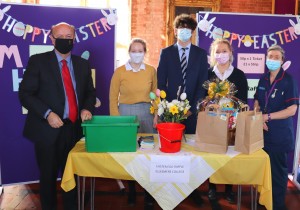 At the end of the Lent term, a group of Sixth Form students, led by Elin Jones (Year 13), organised an Easter egg raffle to raise awareness about MHESS (Mental health at Ellesmere Support System), the support available at school and to raise funds for further training and activities for pupils. £233 was raised and has been divided equally between MHESS and CAP (Christians Against Poverty).

We would like to thank everybody who supported Elin and our team of medical staff with this fund raiser including Mr Wignall who helped draw the results, Sue Hinks for costumes and display boards and the parents, staff and Tesco and Co-op in Ellesmere who very kindly donated Easter Eggs for the raffle.

Mental Health at Ellesmere Support System (MHESS) is an initiative that is led by Year 13 student Elin Jones, a team of Sixth Formers and Alex Murphy, Director of Rugby, all supported by our qualified team of medical staff. The scheme is designed to raise awareness about general mental health and wellbeing for students, as well as the problems associated with the tighter restrictions students are facing during these unprecedented times of Covid. The group are in the process of creating a multi-layered support structure with lots of options for our pupils. Having a student support team provides an approachable source of guidance for students that acts as a stepping stone between pupils and staff. It's not difficult to understand the risks to mental health - something which can creep up on you without being aware of it, which is what prompted the launch of the scheme. Problems can arise in several ways, including anxiety, stress and depression so we must do everything we can to safeguard the health of our students. The support system will monitor, help and advise while raising awareness of the risks to people who are having to deal with every day issues as well as the increased isolation we are all facing at this time.

The idea behind the scheme was put forward by Elin and our Sixth Formers who felt that as well as supporting students with their overall mental health and wellbeing, it was also a safety net to avoid a potentially bad situation from becoming much worse. The fact that Ellesmere College has invested in the training of over 30 pupils and staff, only goes to show how seriously we take the emotional wellbeing of our pupils. Training students places them in the ideal position to recognise and understand the problems and issues faced by their fellow students and offer guidance in helping them seek help and support in maintaining health and welfare. 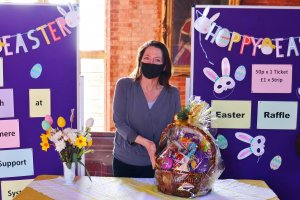