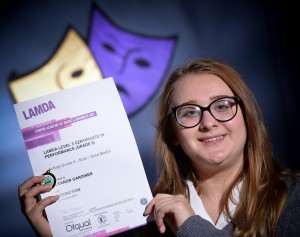 Theatrical students are celebrating after achieving the best set of results the school has seen.

Fifteen students took part in the London Academy of Music and Dramatic Art (LAMDA) examinations, which includes directing and performing up to three pieces from different time periods and answer questions of their pieces. Results from their examinations recorded five students' achieving merit awards, while ten aspiring performers achieved 100% and the highest level of distinction.

Director of Drama, Rachel Shubert said she could not be more proud of her students. She said: "It has been wonderful to see the number of students taking LAMDA examinations increase over recent years. Students value not only the award itself, but the confidence and discipline the LAMDA lessons give them and how this impacts positively on their learning across all subject areas. Students from across all year groups currently have weekly lessons with the uptake of lessons improving year on year. We were particularly proud of our most recent results which saw all 15 students either achieving a merit or distinction in their examination"

Year 13 pupil Eleanor Gardiner, went one step further by achieving not only the Level 3 Certificate in Performance - Acting at Grade 8, but Eleanor was also awarded the Grade 8 Acting Solo Gold Medal, which is the highest accolade of achievement through the LAMDA examinations.

Eleanor, from Market Drayton said "This exam really helped me with my confidence as well as being fun and a new challenge for me. The school has a full and varied arts programme so there is plenty of opportunities for me to perform on stage and in front of an audience, which helps a lot for these assessments. I am thrilled to have been awarded my Grade 8 qualifications and I am hoping to continue to be involved in LAMDA once I finished my A-levels". The 17 year old who is also a keen singer performed three monologues from memory; Sheila from an Inspector Calls by English dramatist J. B. Priestley, Julia from Two Gentlemen of Verona by William Shakespeare and Sophie from Phil Porter's Blink.

Headmaster, Brendan Wignall, said "I am delighted that our students have been recognised in this way. It is great for the school to have these successes as we often worry that our various arts programmes are not sufficiently recognised for the excellence they provide. People often associate Ellesmere with sport, because sport makes a lot of noise when teams win things (and we win an awful lot of things), but it is important to us that people understand that our arts programme is just as good. Testament to that is the fact that Ellesmere remains the only independent school in the country to hold the coveted Arts Council of Great Britain's Artsmark Platinum Award for its outstanding provision in the arts. Our LAMDA students benefit from this key aspect of Ellesmere College and, of course, we benefit hugely from their talents."