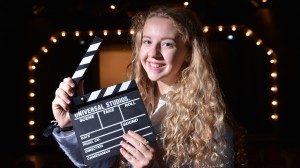 A talented drama student has fought off strong competition to be accepted into the country's top youth theatre. Anastasia Newton will work with The National Youth Film Academy next summer. The 16-year-old, will join the academies training course in London, where students are taught skills and acting techniques by professionals. Anastasia will also work as an actor and film maker to write, produce, film and screen a short film. She said she was delighted to have earned a place on the training course following her audition piece from the 2014 American romantic drama, The Fault in Our Stars.

She said "Becoming accepted as a member of The National Youth Film Academy is a much-coveted prize for any drama student. It is a marvellous platform for young actors and a number of British performers have gained early experience on their courses."

Anastasia has been selected from 3000 applicants from all over Great Britain and Northern Ireland who auditioned, and only 100 students were selected for the summer programme. Notable past speakers on the programme have included the producer of the King's Speech, Iain Canning, Gareth Edwards, Director of Monsters and Godzilla as well script writers and set designers Paul Alexander, Red Dwarf, and Hugo Luczyc-Wyhowski from Guy Ritchie's movie Snatch.