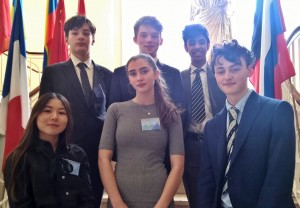 Six students from Ellesmere College have been praised for their contribution to The Model United Nations Conference in Leiden, Holland, last week.

Whilst at the conference they debated global issues with fellow Sixth Formers from the Netherlands, Germany, Switzerland, Turkey, Egypt, Greece, Israel and Nepal.

First-time participants Emily-Rose Coupe and Patrick Crowe were commended for their work as Croatian and Venezuelan delegates in the Human Rights Council.

Meanwhile, Filip Radu, Angel Xia, Ross Murdoch and Pratham Manchanda were all judged to be 'best delegate' in their committees which included the General Assemblies, the ECOSOC and the Group of Twenty.

Pratham said: "Good preparation for this event is key. We were amazed with the awards we got, especially as every one of the group from Ellesmere College was recognised for their contribution. I was particularly impressed with how fast our new delegates assumed important roles in their committees."

Pratham added that the range of issues discussed in committees was 'extraordinary' - ranging from global armament to issues of inheritance tax, migration and terrorism threats.

At the three-day event, delegates also discussed the prevention of an arms race in outer space, 'brain drain' in conflict areas, and the human rights of terrorism suspects.

Emily-Rose said: "I thoroughly enjoyed this event and the different stages of debate, from lobbying to the drafting and amending of resolutions. Debating global issues with other delegates interested in worldwide politics, and generating solutions to pertinent problems and injustices, gave me an excellent insight into how the United Nations in New York works."

Patrick added: "I am fascinated by the United Nations, its decision-making processes and the impact these decisions have globally, so this MUN conference was an activity I definitely wanted to be involved with."

Joint MUN Director and Head of Modern and Foreign Languages, Christina Westwood, added: "There is no doubt that Model United Nation conferences develop empathy, confidence and leadership skills. The mixture of in-depth country research, public speaking, resolution and amendment writing followed by negotiation in various committees is something Ellesmere College students have always mastered well but this year's delegation made us particularly proud. We hope they will involve themselves in future MUN events and that they will be joined by many of their peers keen to experience MUN for themselves."

The Leiden conference was one of three events that students from Ellesmere College take part in each year. It will be followed by an event in York in February and one in Bath in March.