'Cricket for Girls' Bowls Over Players in Masterclass 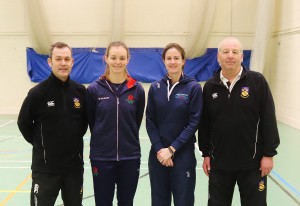 Lydia Greenway, the former England Cricketer, visited Ellesmere College at the weekend to deliver her 'Cricket for Girls' Masterclass to a broad group of invited players - some already playing at County level, and to encourage the younger attendees to take up the sport during the summer.

As part of her national initiative, Lydia took the girls through a focused two-hour session which went over all aspects of the game alongside coach Evelyn Jones who captains Lancashire Cricket Club and who will lead the 'Cricket for Girls Hub' through the summer term based at the College.

Lydia, who featured for England in 14 test matches and 126 one day internationals, was pleased to see such a good level of interest from the girls in attendance.

"I think it's really important to inspire younger girls in sports like cricket," she said. "Today we had a good mixture of girls - some of them had played county cricket before whereas some girls were fairly new to the sport. I think it's important that whatever ability you're at, you still get the opportunity to play the game. Today was more about making sure they enjoyed the sessions and judging by the feedback we got at the end I think we were able to do that quite well."

She also commented about how provision for the game has changed for girls over the years: "There was less interest when I was starting out in cricket, and I think that was partly to do with the fact that any girls wanting to play the game then would have to play in the boys' team. I think it took a certain type of girl to be content in that environment, but nowadays you get a lot of girls who play the game because they enjoy it. They might not necessarily have the aspiration of playing for England, so it's very much about creating the right environment for both types of players."

Director of Cricket at Ellesmere College Gareth Owen added: "We see how popular girl's cricket has become here at Ellesmere, and particularly across North Shropshire and into Wales. We took the opportunity to highlight the provision for girls cricket here at the College by getting in touch with Lydia as she's done so much for the girl's game across the country." "So, attendee's for todays Masterclass have come from a number of schools across the region, those who currently play for Shropshire Cricket and from the College itself. She's a very experienced player, as is Evelyn, who has helped out a lot and will be here throughout the summer. Evelyn is also a very experienced player and she's going to help to develop the game of our cricketers here at the College."

Gareth sees a bright future for the Girls Cricket Hub at the College with role models such as Lydia and Evelyn supporting their progression to play at national level and beyond: "We had 16 girls here today which is a good number, and in terms of the number of girls interested in the sport at the College from ages 9 to 16 and it has increased massively over the years. Lydia being an ex-England player and Evelyn being involved with the England set-up gives the girls role models and someone to aspire to - so it's absolutely essential and it creates a buzz around here to have them visit."

For more on our Cricket Academy & Scholarships please visit: Cricket At Ellesmere 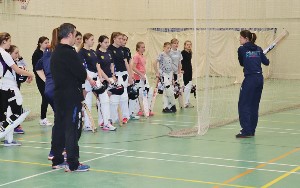