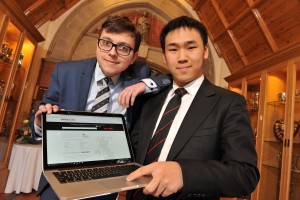 Budding computer scientists have learned they are two of the top young computer programmers in the country after securing a place in the finals of a prestigious nationwide competition.

Mak Graczyk and Victor Zhao, finished in the top 15 competitors at the British Informatics Olympiad (BIO), which is open to students aged under 19 at secondary schools and sixth form colleges across the UK. Both Mak and Victor, 17, will now compete at Cambridge University for a top four place that would see them represent Britain at the International Informatics Olympiad. To get to the final, they had to complete a three-hour exam at school in which they had to write a computer programme to solve problems then answer theoretical questions.

Head of Computer Science, Dr Sarah Shakibi says "We were absolutely delighted when Dr Richard Forster wrote to the boys to let them know that they would be 2 out of the total 15 finalists! Maks and Victor come from different countries and use different default programming languages. This competition will not only challenge their already well-developed programming skills but also their Computational and Algorithmic thought processes. Maks and Victor have been practicing very hard on the USACO training website (as required by the organisers of the competition) and I have every confidence that they will be very well prepared for this exciting competition".

The final, held in the Easter holidays, tests algorithmic ability and consists of a series of written and programming problems. Victor said, "I have participated in a number of Olympiads whilst at home in China and I was genuinely shocked but also pleased to hear that I had got through to the final. It is going to be a great experience at Cambridge University and competing against top young programmers throughout the country."

The invitation to the finals comes at a time when the school has just been awarded a leading role in promoting Computing in Education. The school has received the accolade from a government-backed initiative known as (CAS) Computing at School. This fundamental role will be to develop a broad and balanced Computer Science curriculum and provide specialist guidance to other schools and CPD opportunities to teachers in the county.