Computer Science Students Score in top 50 in the UK 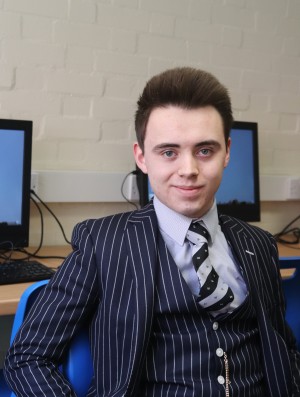 Maks Graczyk and Alistair O'Brien will be rewarded with a trip to Bath and a prize for being among the top 50 highest scores from students across the country in the AQA Computer Science A-Level course.

Maks, who is from Jeziora in Poland, not only achieved an A* in Computer Science but attained the top grade in his Mathematics, Further Maths and Physics A-Levels too. He is taking up a place at Imperial College in London this term to read Computing.

Alistair's ability in Computer Science was recognised early on which led to him taking this exam a year early in Yr 12. He has just returned into Year 13 at Ellesmere and is studying Mathematics, Further Maths and Physics A-Levels.

The pair have been invited to Bath, where internet services company Netcraft is based, to meet the other prize winners along with current and recent Computing students from top UK universities.

They will also be given a top of the range Targus laptop rucksack in recognition of their efforts.

Brendan Wignall, Headmaster at Ellesmere College, said: "Once again this summer we were delighted with both our GCSE and A-Level results which reflect the talent, determination and hard-work of not only the students themselves but also the incredible effort put in by the teaching staff at Ellesmere."

"More than 50 per cent of the marks achieved at A-Level were A*, A and B grades with an overall pass rate of 92 per cent. We are especially pleased Maks and Alistair's fantastic achievements in their Computer Science exams have been recognised and we look forward to hearing all about their trip to Bath."

"They have really done us proud - we wish Maks well as he begins his studies at Imperial College and we are thrilled to welcome Alistair back for his final year with us. Our ethos is to allow talented students to take exams early if they show great ability in the subject, rather than holding them back. With Alistair this has clearly paid off."

For more information on our University Destinations 2018 please click here.