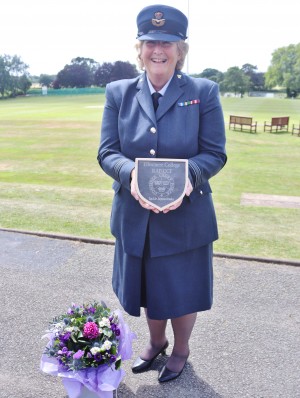 Students, staff and parents at Ellesmere College said farewell to one of their most popular teachers at the end of this term.

After 20 years teaching and mentoring at the College, physics teacher Debbie Joynson-Brooke retired and was presented with a special commemorative plaque by the RAF contingent in a ceremony on the Terraces. During her time at the college, Mrs Joynson-Brooke was heavily involved in the Combined Cadet Force and was Director of Activities, but admitted retirement and not being at the school will be a difficult feeling.

"It will be very odd not coming to college every day," she said. "This has been my second home for many years and I have loved every moment of it. The students have been an inspiration to me each year and make me very proud to have been involved in so many incredible opportunities. I am sure I will still be involved in some way, I may be retiring but I have plenty of other roles which I will see through."

In May this year Mrs Joynson-Brooke and her husband Frank Brooke attended a Gold Duke of Edinburgh (DoE) award presentation at Buckingham Palace along with 16 current and former students at the College.During the ceremony the couple were presented with awards for 28 and 30 years respective service to the DoE scheme.

Brendan Wignall, Headmaster of Ellesmere College, says Mrs Joynson-Brooke will be a much-missed member of staff."Debbie has been a great servant to Ellesmere College over the last 20 years and I would like to pay tribute to all her hard work and dedication during that time," he said. "She has been an integral part of our teaching staff at Ellesmere College and has also been a driving force behind a range of other activities. Debbie has been a popular member of staff with colleagues, students and parents and is always heavily involved with whatever is going on in school. It was really pleasing to see Debbie and Frank receive due recognition for their efforts with the Duke of Edinburgh Awards at the recent awards ceremony at Buckingham Palace."

"Their combined service is a truly remarkable effort and it was fitting that they should enjoy the day with 16 past and present students who were also honoured. Debbie has been an influential player in Ellesmere College's continuing success over the last 20 years. We would like to wish her well - she will be sorely missed."