Caro in Fine Form for Club and Country 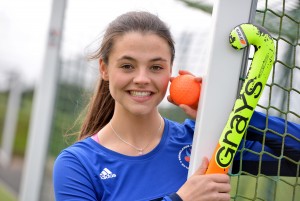 Caro, a sixth-form student at Ellesmere, struck a superb goal midway through the first half to put Brooklands 2-1 up against Beeston Hockey Club - and there was no further score as the Manchester side gained their 16th victory from 18 league games to clinch the National League (Conference North).

Caro, like her twin sister Lottie, made her National League debut last season at the age of 16. She has been ever-present this season for the first team, and has scored five goals for the Sale based club.

"To be playing week in, week out, at the top of the second tier of domestic hockey when only 18 and still at school, is very much to her credit," said her father, John.

Caro has had a busy month with the Wales Women's Squad following impressive performances in last summer's under 18 European Championships and Futures Cup. Caro was part of the senior side who travelled to Lille in France to play in a successful 3-match series against the French under 21 side, where she scored the winning goal to level the match series.

The Shropshire teenager then headed down to the Bisham Abbey Sports Centre for a 3-day camp and practice matches against the England under 18s before being asked to be on standby for an international match against Switzerland.

"I've been involved with the Welsh squads for a number of years now, representing the under 16, under 18 and under 21s, but I continue to work hard and I never take this for granted. It's very rare in modern sport for players to have their spots in the team cemented. I'm still young, I'm only 18 and I'm still trying to get established" said Caro.

In the meantime, twin sister, Lottie, who is also a member of the Brooklands first team and the under 18 Wales squad is set to return to training after being side-lined through an injury since January.