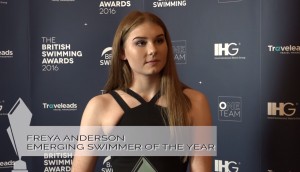 While competing at Stockport Metro's November Open Meet, the 15-year-old roared to the wall first in the women's open 100 short course meters freestyle, stopping the clock at 54.26. Splitting, 26.28/27.98, Anderson scored a shiny new British Junior Record in the event, setting fire to the previous junior mark of 55.29 held by Jessica Lloyd since 2010.

Anderson was the only sub-55-second swimmer of the field and now holds two British Junior SCM Records, adding the 100m freestyle to her already-established 100 breaststroke mark of 1:08.36 from last year.

Identified as a member of Britain's Podium Potential Program, Anderson is no stranger to the international podium. Last year the Ellesmere College athlete scored the gold in the 100m freestyle event at the European Junior Championships in Hungary. Her winning time of 54.72 sits as Britain's LCM Junior Record for 15-year-olds in the event.