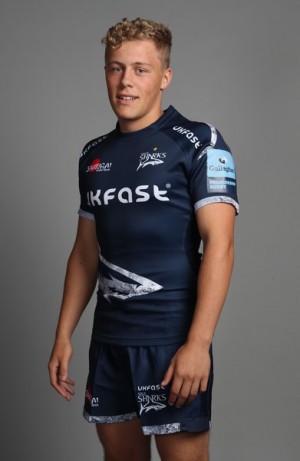 Scrum-half Gus, 18, joined the academy at Premiership side Sale Sharks and kicked off his time there in the squad for the televised Rugby Sevens at Franklins Gardens, Northampton. The games on BT Sport gave Gus his first taste of large scale rugby.

Alex Murphy, Director of the Rugby Academy at Ellesmere College, said: "We are thrilled at his success and that he's signed a five year contract with Sale Sharks. He was always destined for good things in rugby and he was a determined pupil here - both at the Academy and in his academic studies."

Since leaving Ellesmere College Gus played for Scotland 18s, captained Scotland 19s in games against Scottish Students, Romania and France and was then selected to play for Scotland 20s against Ireland.

He was also a non travelling reserve for the Scotland U20 World Cup squad.

Gus spent two years studying at Ellesmere College and completed his GCSEs there before going north of the border to complete his 'Advanced Highers' at the Dollar Academy in Clackmannanshire.

Gus said: "I enjoyed my time at Ellesmere and it helped me focus on my rugby alongside my academic studies. There was a lot of opportunity there but I headed North of the Border with aspirations to play for Scotland at Under-18 level - which I did. I am now relishing the opportunity to train with the senior squad at Carrington, where the Academy and senior squad work together. Supporters of a certain age may remember my Dad Mark, also a scrum half, who played for Sale RFC in the mid-nineties before moving to Orrell."

The Ellesmere College Rugby Academy will be hosting a Scholarship Afternoon on November 14th for U13/14 and U16s - visit www.ellesmere.com for more.