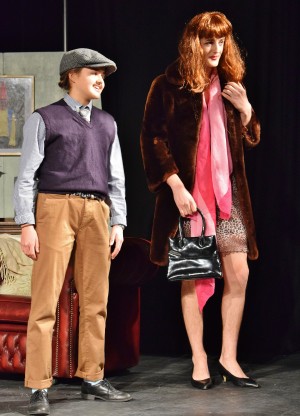 The Ellesmere College House Plays are always an exciting and hard fought for competition between Houses in the Michaelmas Term, and this year didn't disappoint as students took to the stage with their interpretations of works by Alan Ayckbourn to battle it out to win the prestigious 'Ellie Award' at the end of the night!

The House Play Competition got off to a brisk start with 'Improbable Fiction', a challenging piece in which the members of a Writers' Circle discuss their current projects, which are then mysteriously brought to life during the second half. Directed by Verity Buglass in what was generally agreed to be the best set, the actors worked hard to develop believable and very entertaining characters and there were some excellent performances, especially from Ollie Williams as the pivotal Arnold, who frequently kept the action going, Gaia Togni as Ilsa, who created a memorable moment kicking open a genuinely stuck set door whilst carrying a full tea tray, and Scott Phillips as Beavis, who ranged from playing the piano on his knees to sporting an incredible wig as an alien hunter.

The audience were on the more familiar territory of a dysfunctional family Christmas with 'Season's Greetings', where the adults proved themselves to be the ones who were behaving like children. All the directors had been faced with the problem of cutting down two hour play scripts and here Lizzie Martin solved the problem with an excellent cast summary in character at the start. Ronan Philips made the usually grumpy character of Harvey much more entertaining by emphasising his eccentricity, and Tom Ward demonstrated his excellent comic timing in both the children's puppet show scene and when called upon to assess the dead body.

The second night of plays began with 'Neighbourhood Watch', a challenging piece about a group of idealistic neighbours who end up doing more harm than good, which ranged from laugh out loud moments to much darker and more serious elements. Directed by Toby Slack, Wakeman Lambart made particularly good use of new and younger students, uncovering some seriously promising acting talent, for example Josie Evans and Gracie Shallcross as Hilda and Martin Massie and Abigail Manford as the vulnerable Magda Bradley. However, as is the tradition in House Plays, it was a 'boy playing a girl' who stole the show, as Toby Bellis donned a dress to play the predatory and very convincing Amy Janner.

Woodard took on the task of performing one of Alan Ayckbourn's less known works 'My Wonderful Day', in which the badbehaviour of the adults around her is seen through the eyes of the child Winnie as she writes her diary, beautifully played with wide-eyed innocence by Anouska Newton. Here again Jed Corbett 'rocked the frock' as Tiffany, the love interest of convincing Lothario Kevin, played by Olly Trollope. Director Annie Newton pushed along the action with real pace and comic timing and pulled off some excellent moments such as when Winnie's mother's waters broke in spectacular fashion, as well as making excellent use of video projection in the ill-timed and revealing advert for Kevin's new business venture.

At the end of delightful evenings of entertainment, there was the usual eager anticipation of who would win the individual 'Ellie Awards'. However, it must be said that all the students in each House were winners because of their enthusiasm, commitment and teamwork, and once again the House Play Competition showed why it is one of the most popular of our annual events at Ellesmere College.