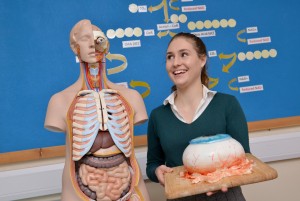 The Physiological Society announced the winners of this year's Biology Baking Competition. Well known baking blogger MadNad awarded the baker's choice prize to sixth form student Elinor Haworth for her eyeball cake, 'Eye live my life through a lens'. The winning entrees for their BioBake week were voted for by the public, physiologist's and professional bakers, who are recognised for their bold and daring cake designs.

Elinor said "I really enjoyed baking my eyeball cake as it gave me an opportunity combine creativity with my interest in biology. I am proud that I won the Baker's choice award as it justifies all of the hours I spent in the kitchen!"

The Society was fascinated by the creativity of this year's cakes when shortlisting a selection. Judges admired the level of detail on the eye, 'not just the glorious sheen, but the detailed iris too,' and was 'even a little grossed out by whatever is poking out underneath.'

The Physiological Society brings together over 3,500 scientists from over 60 countries. Since its foundation in 1876, its members have contributed to the nation's knowledge of biological systems and the treatment of diseases.

The Physiologist's prize went to Ailyn Myles from Coedcae School for her cake, Kidneys showing the nephrons and Georgina Winsey from St Helen & St Katharine School, who received the Public Choice award with The Brain Cake.