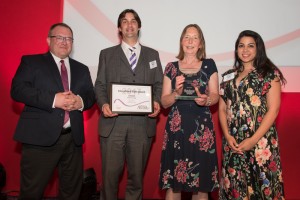 Ellesmere College is celebrating after being named winners at a prestigious Education Business Awards. Ellesmere won the educational visits category and received a highly commended for music, at the ceremony which was held at the Grange Hotel, St Pauls, London. The awards recognised the sterling work of schools across all sectors and were presented by Stephen Drew of reality TV show Educating Essex.

Over 300 guests attended the ceremony which rewarded schools in 21 categories. Judges praised the Monduli Green Project that is close to pupils hearts at Ellesmere College and works with several villages and five schools to support environmental, water and educational needs of three schools in Tanzania. Fourteen pupils volunteered their time to help with infrastructure projects at Sinoni, Olarash and Mtimnoja Primary Schools.

The commended award for music sealed what has been a very successful year for the school, which is gaining a reputation for excellence with its singing. Successful honours in the under 18 & under 21 choir categories at the Chester and Oswestry youth music festivals as well as invitations to provide music for the Shropshire County Council's Civic Service helped to convince the judging panel of Ellesmere College's commitment to the arts.

Deputy Head Vicky Pritt-Roberts said, "It was a pleasure to be invited to attend the awards, which received a record number of entries this year. We were very excited to be shortlisted in two categories and I was delighted when Ellesmere was announced as the winner of the educational visits category and commended for the music award. This excellent result is due to the hard work and dedication of our staff, and to the enthusiasm and commitment of our pupils"