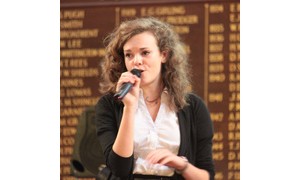 Performing in Big School to a packed audience and following many rehearsals during the academic year, the School's Choral Society Choir joined the School’s Senior and Lower School Choirs for their annual joint concert which also included performances by the Scholars’ Ensemble and the School’s Orchestra.

After the initial welcome and introduction to the evening by Roger Paul, Director of Music, the enthusiastic Lower School Choir, conducted by Rebecca Paul, Music Teacher, performed the opening numbers and set the scene for what was to follow. They performed a medley of song from the musical and film, Mary Poppins.

The Senior School’s Scholars’ Ensemble then took to the stage and accompanied by Roger Paul, performed Bizet’s Carmen Suite, to the delight of the audience. Three very talented musicians then had the opportunity to perform, and wowed the audience. George Fradley, piano and John Paul on bass guitar accompanied Alice Tow as she sang Summertime and A Nightingale sang in Berkeley Square.

The evening of superb musical entertainment continued with the Orchestra performing Aztec Fire by Jay Bocock, The Incredibles by Michael Giacchino and the ever-popular Jurassic Park and themes from E. T. by John Williams.

After the interval, it was the turn of the Ellesmere College Choral Society to sing Cole Porter’s, Another opening, another show from the show, Kiss me Kate, and the song created for the Military Wives, Paul Mealor’s Wherever you are. The School’s Chapel Choir than sang the first Freddie Mercury song of the evening, Don’t stop me now and the Beach Boys, Babara-Ann.

The Senior Choir and Choral Society Choir were conducted by Roger Paul, Director of Music, who commented, ‘All three Choirs have such enthusiastic members who have rehearsed long and hard to perfect their performances.’

The evening ended with a Grand Finale featuring all the performers, well over 100 voices, singing 2 Freddie Mercury songs, Somebody to Love and Bohemian Rhapsody. The audience was given the opportunity to have either song performed again and Bohemian Rhapsody was chosen. The encore was sung with great gusto and the evening ended on a very high note. Roger Paul concluded, ‘I was delighted how they all performed together so well and like many in our audience, I too look forward to next year’s concert. ‘