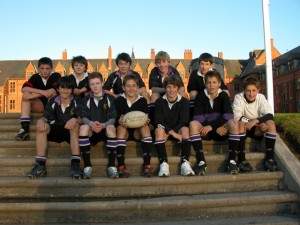 Colin Cawcutt, Teacher in charge of the U14 Ellesmere College squad commented, 'Great commitment and dedication has been shown by the boys, which has resulted in them playing some great rugby. Well done to all the players selected.'

Paul Goodwin, Director of Rugby at Ellesmere College added 'The School was recently delighted to learn that, from the Senior Rugby Squad, an incredible thirteen players were called up for regional representation. Now further success has been achieved in the junior teams at the Under 14 level with an amazing eleven players being selected at the recent Shropshire trials. Besides being a tremendous individual achievement for all the boys, it also ensures that the future looks very strong as this group move up the School.'