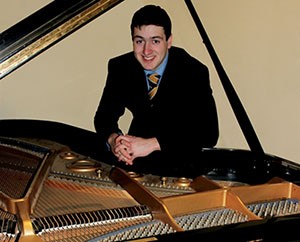 George, who is currently in his last year of A-levels at Ellesmere College, had his first taste of playing the piano at the age of six and enjoyed it immediately. In his first year of playing piano George won the “Most Promising Pianist” music prize in his hometown of Market Drayton, North Shropshire. Since then his playing has gone from strength to strength and his ability has grown with his love for performing. George attended Edenhurst Prep School in Newcastle-under-Lyme before joining Ellesmere College in 2008, starting in year 9 as a music scholar.

Soon after joining Ellesmere College, George realised what career path he wished to take and that was to be a concert pianist. He couldn’t have been more at home as music is central to life at Ellesmere; there is something for everyone from the senior school chapel choir through to individual performances and rock bands. George says, “It’s a very friendly school and the atmosphere is fantastic, there are so many opportunities to perform as a musician at every level, such as the Wednesday morning assembly, which is a nerve racking place to perform but a rewarding one nonetheless. Teachers encourage you to participate in as many activities as possible, making your time there a memorable and brilliant part of your life”.

As an Ellesmere College pupil there is lots of support from the teachers who are always there to help pupils with their studies outside of lessons. Ellesmere is a place where the opportunities to perform are numerous, both as an actor and as a musician. George, who has successfully competed at music festivals in North Staffordshire, Shropshire and Cheshire playing piano and saxophone, is also a member of the Birmingham Junior Conservatoire which provides specialist musical tuition for talented young musicians. Tutors are of the highest calibre and include members of the City of Birmingham Symphony Orchestra, professional musicians and senior Conservatoire staff.

"With the support from my teachers, both in and out of the classroom, I have been encouraged to become a more confident individual. As students at Ellesmere, we are lucky to have daily input from our tutors with a genuine concern for our care, not to mention the high standard of teaching in every subject, without this I could never have achieved the results I have". He said

Throughout his time at Elllesmere College, George has played an integral part of musical events for the community, such as the Autumn and Three Choirs Concert. The concert that features over 100 singers from Ellesmere’s Senior and Lower School choirs join forces for one night with the local choral society and a community choir to entertain a packed audience. The Oswestry music festival is another musical highlight for George as he very successfully performs along with his peers.