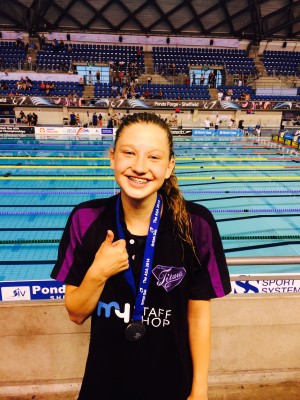 Hi, my name is Tazmin Pugh, I'm 15 years old and attend Ellesmere College Titans in the wilds of north Shropshire. I recently competed for England against Russia, Ukraine, Germany and Italy (hosts) in the 'Four Nations Meet' but I have been swimming since three months old. I started with 'Aquatots' and moved onto my local club of Pershore and by the age of 8 I was topping up my hours at Worcester Swimming Club.

Although not my strongest stroke, amusingly at this age, I won the National Small Schools (ISA) swimming championships in breaststroke. When my school friends were asked who would like to swim in the Midland Championships (in freestyle backstroke and breaststroke) I was very slow to put my hand up. I then followed this title with ISA titles in freestyle and backstroke, the following two years.

From age nine onwards I started winning County titles, the last three years finishing 1st in the BAGcats the points based prizes in the British Age Group awards. From the age of ten, although I had won Midland Age Group Medals including gold, it was not until I moved to Ellesmere College Titans at thirteen that I stepped up a gear and rewarded my new coach Alan Bircher by winning the BAGcat title in 2014.

I'm very fortunate to be accepted on a swimming scholarship at Ellesmere College. The School really supports the 'Titans' performances in both the pool and open water. It is especially good in that I don't have the usual early starts and late finishes, as we can train in the school day and still enjoy social time with school friends afterwards.

In 2014 I qualified in ten events at the National Age Groups and although I withdrew from a number, due to injury, I made it through to five finals taking Gold in the 400m IM together with two Silvers, a Bronze and a 5th place. By this time fly was becoming my favourite stroke followed by the Individual Medley.

Return from my Injury

After a short period of treatment and light training I was back competing by October, and I was overjoyed when in February I was selected for the West Midlands team to compete in the 17th Luxembourg Euro Meet. Five of us (Chloe Golding, Olivia Gardner, Hannah Knight, Jacob Jackson, myself) being from the 'Titans'. I came home with two Golds and two Silver medals, together with Regional records. I couldn't wait to go abroad again, with an opportunity soon arising at the Junior selection trials for the European Games (Baku). My best chance came immediately in the 200m fly but with one of our age category (15/16 yr) Laura Stephens going an incredible 2.11.76 making the Open Finals, my 2nd place was not enough even though I beat one of Rachel Kelly's West Midland Regional Junior Records.

Although the disappointment hurt I realised I had to move on and although I broke two more Regional Records and achieved a 2nd placing in my age-group final, automatic selection eluded me. Following the trials my coach and I re-set our goals for the season, hoping to make England Development 'phase 3' overseas selection. In March, great news came that my friend and team mate Ellinor Southward had been selected for 'Moscow' followed by our coach calling out a while later "Taz you're going as well" I was so happy and couldn't stop smiling. Due to the political situation the venue was changed to 'Lignano' in Italy, with club mates Hattie Rothwell and Olivia Gardner, who were also invited to the Open Water England Development camp in Mallorca.

Arriving in Italy I was chosen to compete (15/16yr) in the three fly events and the 800m free. Competition started well with winning the 50m fly on the first day and a new (Reg Rec). On the second day I took Gold in the 200m butterfly (Reg Rec) and when I looked up at the board it was the 'best bit' of the whole trip, quickly followed by the 'worst bit'.  With only fifteen minutes allowed before I was in the 'call room' for the 800m,  I swam to a new pb but only secured a Silver for England. In my last event the 100m fly I won my third Gold again in a new pb and Regional Record time.

In the closing ceremony I was presented with a trophy and an 'I-Phone 6'(!!) for 'Best overall Performance'. To be honest I was surprised by the times but I know these are just a starting point. The whole experience was amazing with the whole team supportive and everyone so friendly.  Since coming home I have gone even quicker with times putting me 1st and 2nd in the European rankings in the 100m and 200m fly for 15/16 girls.

In the near future I will continue to train extremely hard for the British Summer Championships and further ahead I am definitely hoping for the opportunity of representing my country again. If not this year, maybe in 2016 and beyond, because meeting such great swimmers and forever learning from these experiences abroad just wets my appetite for more.