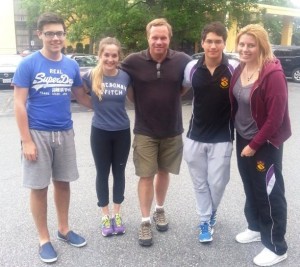 When Dave Butler came to Ellesmere College in November 2014, I thought it would be just another useful EDGE lecture. What I definitely didn't expect was that I and three other Ellesmere students would be chosen to represent the School at the Congress of Future Physicians and Medical Scientists along with the brightest and most distinguished high school students from across America.

Dave is founder and CEO of the Safe Haven Project and Youth Futures International and every day he helps and inspires young people all over the world to strive for their dreams. This time he made this dream come true for Charlotte, Felipe, Will and me, as we were the lucky ones to be selected for the Congress. Not only were we about to fly to Boston, but also we had the opportunity to meet some of the best doctors and scientists from around the world and, moreover, we shared this experience with thousands of equally enthusiastic, aspiring medics just like us.

We were promised Nobel Prize Winners, top Medical School Deans, Ivy League academic leaders, leaders of medicine, as well as some of their fascinating patients. We were all really excited, weeks before the congress even started. On day one of the congress we were the first students in the arena, as VIP guests of Dave Butler, and so were able to gain front row seats, which made it even more exciting, with our picture appearing on screens all over the arena. The congress definitely didn't lack a buzz or motivation as presenters called upon - in between dance sessions - famous "in-demand" speakers such as Bo Eason and Fabienne Fredrickson.

The whole congress was led under the motto 'Energy Baby!' Indeed, energy wasn't lacking in the congress of the students either. You could literally see the interest and passion for science and medicine in every young person in the arena; we were all eager to learn something new. Among the impressive speakers was Sir Richard Roberts, who is a British biochemist and molecular biologist. Sir Richard won the Nobel Prize for Psychology and Medicine for the discovery of introns in eukaryotic DNA and the mechanism of gene-splicing. Under the title 'A crime against humanity' he spoke to us about the necessity of cheap drugs and basic care in developing countries. Moreover he introduced GMO's, [genetically modified organisms], as a solution to developing countries with common Vitamin A deficiency, which causes more deaths than HIV/Aids, Tuberculosis and Malaria put together.

A fascinating impression was left by Bohdan Pomahac, the plastic surgeon, who performed the first, full-face transplant in the USA. Carmen Blandin Tarleton, who was the first to receive the transplant, spoke emotionally as she told her story. Carmen was beaten by her husband with a baseball bat and doused with industrial strength lye, which resulted in burns covering more than 80% of her body and after 55 operations she is still a strong, optimistic women who motivated everyone.

From one impressive survivor to another, Dr. Richard Sacra, is an Ebola survivor. He was aware of the risks of Ebola and yet still returned to Liberia to help the people. He explained that, because of Ebola, all the hospitals closed, which led to many pregnant women being in labour for too long and so they or their babies often died or suffered from choriocarcinoma, which is a cancer occurring from pregnancy. He made it clear that physicians in 'Third World' countries earn less money, don't have a big departments or staff and risk infections themselves on a daily basis - but they get great the satisfaction by helping people in need as he spoke to us about 'Some risks are worth taking'.

Harvard and MIT Professor Dr. Whitesides explained the 6 main problems in medicine today including the top three Cardiovascular disease, which causes the most deaths in our day, Cancer and Alzheimer/Parkinson disease. Furthermore he introduced the future research fields such as Microorganism and Arthritis. On the last day J. Craig Venter caught our attention with the introduction of digitising biology. He talked about the advances in Genetic Coding (DNA) into a digital code and the emergence of synthetic life. He is also the first to sequence a human genome. The key for him is to see life as a DNA software system. If you change the DNA of something, you change its species.

The outcome of his Genomic Research is Xenotransplantation, where a human organ gets replaced by a pig organ. Moreover he approached the idea of Biological Teleportation and explained that they are currently able to send DNA at the speed of light. In future we would be able to solve rare cancers and diseases and identify mutations with help of machines like the SOL Digital Bioconverter.

During the congress, surprisingly, we were not only addressed by experienced doctors from the older generation, but also students as young as 12 were also invited as speakers. Carson Berry (12 years) investigated 'is suicide linked to concussion', due to the fact that there are over 30,000 suicides in the US each year. It is the third leading cause of death for 15 to 24 year olds. After investigations with his hockey team he definitely could state that Traumatic Brain Injuries are linked to suicide.

Shree Bose spoke who, at 17, won the Google Science Fair in 2011 with her research on how to improve treatment of ovarian cancer for patients who have become resistant to chemotherapy. Her top tips to us as students were - don't be afraid to ask other people for advice, that we should not necessarily stick to our 5-year plan but rather take opportunities when they come along and always, always seek to inspire others.

A lot of the speakers reminded us of our future fortunes such as Dr Hallowell who, on the one hand warns us 'it is totally hard work but it's totally worth it' and on the other 'it is indeed the greatest way in the world to make a living'. Also Fabienne Fredrickson confirms 'it is not a coincidence that you are here, all your experiences have led you to where you are right now' and Bo Eason, who turned from the worst football player, to the best in the world in four years, says 'Anyone who is saying your dreaming to big - flush them out of your life' because there is 'one thing you got, that dozens of other people don't have - your story!'. And even little 12 year old Carson Berry was convinced that 'we are the future of the medical profession!' But my personal inspiration and favourite speaker of the congress was Jack Andraka. At just 15 years old he locked himself in his room for three months during the summer holidays and 'Googled' 8000 proteins to find that one protein that detects pancreatic, ovarian and lung cancer in their early stages. The new diagnostic test includes a paper sensor, which tests for the level of mesothelin. Thanks to him those cancers can now be detected 160 times faster, 26,000 times cheaper and are 400 times more sensitive and almost 100% accurate, compared to the previous tests. At the moment he is researching nano robots for DNA and hopes that one day we will be able to identify a disease on a Smartphone in just 10 seconds.

He is my personal hero of the event and I was even more honoured when Dave Butler made it possible for me to meet him afterwards and not only did I take away a load of motivation but also a picture and an autograph. For people like me, who are keen on studying medicine, the Future Physicians and Medical Scientists Congress was an amazing experience. Meeting the top doctors and scientists of the medical scene and taking them as an inspiring example, as well as getting up to date with the latest advances in medicine and science. A privilege for every aspiring medic! Therefore I think I can say from Charlotte, Will, Felipe and me the biggest thanks go to Dave Butler, who made this all possible and also to Ellesmere College, especially Nick Pettingale who introduced us to this amazing man. Definitely a trip to remember.