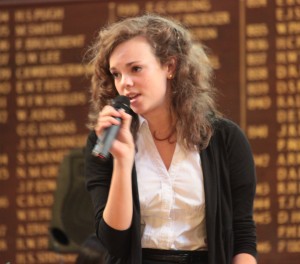 Alice Tow began her education at Malpas Alport Primary School, near Whitchurch, when she was just four years old. Alice admits she was never a particularly academic child in her primary school but she had a love for music. Now Alice, is in her last year of A-levels at Ellesmere which she chose mainly because of the excellent music department, though this was not the only reason.

She says "When my parents and I came for a show round at Ellesmere, we were told that the school prides itself on making students more independent and making sure they achieve the best they can. This was the perfect environment for me at 11 years old because I wasn't necessarily a 'straight-A-student' but I wanted to achieve my greatest potential".

Alice was awarded a Music Scholarship before she joined the school and she has an incredible set of qualifications. She started piano when she was six years old and 11 years later achieved her first distinction at Grade 8. She also took up the clarinet and achieved her Grade 5 a couple of years ago. Alice is also set to take her Grade 8 Voice in March around the same time that she will be singing the famous solo 'Pie Jesu' from the Fauré Requiem in the Ellesmere Choral Society Concert.

Since joining Ellesmere in 2007, Alice has also continued to improve in her academic studies, achieving six 'A' grades and three 'B' grades in her GCSE's before joining the Sixth Form to study Politics, Economics and English. Alice has embraced every element of student life at Ellesmere, taking part in the school orchestra, scholar's ensemble and choir. She has also taken part in many drama productions from 'Threepenny Opera' and 'Vanity Fair' to this year when Alice directed her own House Play - 'Lady Windemere's Fan' by Oscar Wilde.

In 2013, Alice entered the Oswestry Music Festival and came first in the 18 and under Musical Theatre category. She plans to compete once again in the Festival but this time for several more categories - Under 18 Set Piece, Musical Theatre and Own Choice, and Under 21s Two Contrasting Pieces and Opera Solo.

"With the support from my teachers, both in and out of the classroom, I have been encouraged to become a more confident individual. As students at Ellesmere, we are lucky to have the extracurricular opportunities and daily input from our tutors with a genuine concern for our care, not to mention the high standard of teaching in every subject Without this I could never have achieved the results I have".

Alice's future aspiration is to be a broadcast journalist and study Political Science and International Relations at University. This ambition was encouraged by the school's annual participation in the Model United Nations debating conferences which was set up to bring schools from all over the world together to debate certain topics and global issues. Alice was an integral part of the team that travelled to Leiden in the Netherlands in 2011 and The Hague in 2013 where she took on the role of a reporter, producing news features for the conference.

"Both conferences were a brilliant experience and they gave me an insightful understanding into a journalistic workplace and a snapshot into my hopeful future. This is what's so unique about Ellesmere, it supports students with lots of interests and enthusiasm and they provide openings where students can have a go at new things and develop academically and as an individual."