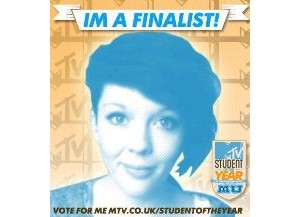 Hi my name is Tally Thompson and I am a past student at Ellesmere College. I have just finished my degree at Loughborough University studying graphic design and visual communications and a few weeks ago, I was nominated for the MTV ‘Student of the Year’ award.

This is a national competition with students entering from all around the country. I had to create a webpage and a video promoting myself and demonstrate through internships, societies and part-time jobs that I am not just an average student. The prize for this award, along with the title of student of the year, is a summer placement in MTV’s media department as well as attending and covering MTV’s EMA Awards in Amsterdam.

The next round is a public vote of the top 20 candidates making it into the top 5. These top 5 are to be filmed and interviewed for MTV for the last round of the competition to win the placement. I now have until Sunday 9th June to get votes in and to make it into the top five. There are only 200 votes separating the top and bottom candidates currently so every vote I get counts. I have beaten hundreds of candidates to make it this far and now I just need your support and backing by voting to keep me in the running to reach the final stages.

I discovered that I was a creative person through the Art and English lessons at Ellesmere College. It was there that the school allowed me to discover and start building my creative and communication skills. This internship would build on those foundations along with my degree that will hopefully bring me closer to my dream job in media.

Please follow the link below to get voting!! It takes less than 30 seconds and every vote is very much appreciated.