International Admissions
< Previous  |  Next >
Home   >   Blog   >  Ellesmere has prepared me for life more than anywhere else! Stuart Green
26
June

Ellesmere has prepared me for life more than anywhere else! Stuart Green 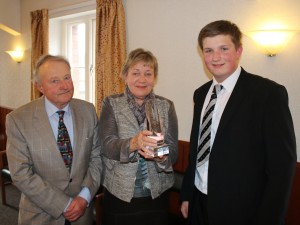 When I was younger my family were never particularly musical, and so it wasn't until year 8 that I started to learn to play the keyboard, at my previous school, The Marches in Oswestry. I never had formal lessons, but instead I played around on an old junior Casio keyboard at home that had been my sister's.

As I learned to play more and more pieces, my ability began to grow, and as I only played pieces I wanted to learn more and my passion for music grew unrestricted. It was two years later that I started having lessons, although they were more to teach me how to read music rather than technique. I have now been playing for five years, and although I have never taken any grade exams I play at around a Grade 8 level.

In 2014 I was privileged enough to receive The Walker Award here at Ellesmere, an organ and academic scholarship sponsored by Mr and Mrs Walker. This has provided me the chance to continue my academic studies within a welcoming community of a variety of individuals, but also contribute to the Ellesmere ethos by getting involved in as many aspects of School life as possible, and so to the Walkers I will be forever grateful.

Since starting here at Ellesmere I have participated in many different events - having started to learn the organ, I have been playing in most chapel services in the mornings, and I also play for the Lower school services. I am an active member of both the Chapel and Chamber choirs, and more recently I have joined the Ellesmere choral society. These and the lower school choir were all showcased at this year's Four Choirs Concert, in which I also I sang a short solo, played a solo piano piece and even performed with a jazz quartet, which I formed with three other music scholars at School.

I also enjoy acting, and when I first took part in the house plays I won an "Ellie" for best supporting actor, a proud moment. I then later took part in the senior school play, "Return to The Forbidden Planet", where I had a lead role as Cookie, a hopelessly in love chef aboard the star-ship Raven.

There are always so many opportunities here to do something new, and it doesn't stop there; I played lead keyboard for the Lower school performance of Bugsy Malone, and next year I am playing the lead in a play directed by two fellow sixth formers. I also hope to get involved with the senior school play once again.

I have enjoyed my time here at Ellesmere, so much, and there is always something interesting going on. Having been appointed as a prefect for the upper sixth, and also having received my house coloured tie. I could not be prouder to be a part of this community.

Everyone is friendly, welcoming and I have managed to fit in where I never thought I could, and what I have learned here has helped me to understand my own strengths and it has prepared me for life more than anywhere else.