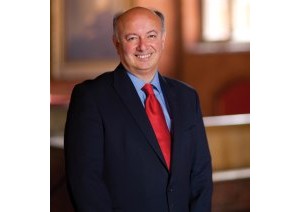 Headmaster, Brendan Wignall, has just celebrated his 50th term since taking over the reins at Ellesmere College. We asked him to reflect on his time here and what he looks forward to about the future.

Q. You are in your 50th Term at Ellesmere College which means that you started here in 1996. People say that Ellesmere is a very different place from what it was when you arrived. How would you characterise the changes?

A. Well, in 1996 I think that, in terms of ethos and style, Ellesmere College was culturally very much a boys’ 13 to 18 boarding school. It had day boys, it had girls and it had pupils below the age of 13, but the mind set was very much that of a traditional senior boys’ boarding school model. I think it is very clear to anyone visiting or being part of Ellesmere now that we are, culturally speaking, a 7 to 18 boarding, weekly boarding, day co-educational school with no differentiation between the various categories of pupils that we have. It is also a much bigger school, of course: in 1996 numbers were around 320, whereas today they are just under 600.

Q. There must have been a number of physical changes in your time as well?

A. Yes, I realise looking back there have been a great deal of physical and facility changes, although I think they are less important than the cultural changes. Off the top of my head, we have built the Lower School, the sports hall, covered the swimming pool, significantly extended St Oswald’s, the girl’s Sixth Form House, created a new boy’s Sixth Form House in St Luke’s, extended the Hodson Science block and built a new Learning Support Department. We have also bought another 74 acres of land and most recently put down a top quality all weather surface for hockey. I’ve almost certainly forgotten something, of course.

Q. What achievements are you most proud of in your time at Ellesmere?

A. I think to be proud of anything is probably asking for trouble! I am really pleased that we have such a clear culture and ethos. There is a genuine focus on individuals here and we are all committed to that, not just paying lip service to it as the more statistically-obsessed schools tend to do. The idea that studying is a crucial start but most definitely not a finish, and that unless an education goes well beyond the classroom for everyone without exception it is of little value, is also deeply embedded now. The introduction of the International Baccalaureate Diploma alongside A-Levels has undoubtedly energised the Sixth Form over the last few years and I think I can be proud of my colleagues and how they embraced and implemented that change. The development of the various sports academies, the Arena Arts programme and our leadership development programme are all things that are pleasing. Thinking of Ellesmere as a business, I am happy that we have such a strong culture of flexibility and responsiveness to circumstances: there is no sense that we feel that we have reached a steady state and that we can be content with how things are.

Q. What plans are there for the future?

A. We have developed our facilities a lot in recent years, but we are far from satisfied. However, we live in interesting times, economically speaking, and will need to be cautious over the next few years, I think. Having said that, we are in the process of putting together a 20 year building plan and if we think there is a project that can justified and afforded sensibly we will go for it. History at Ellesmere suggests that we move quite quickly. We introduced the I.B. over a period of less than 18 months when the normal lead time is 3 to 4 years; more recently, of course, we had no idea of planning to launch a Golf Academy until a couple of months ago, but are now in the process of doing just that.

Q. And personal plans for the future?

A. I have no intention of leaving, although I have received some surprisingly flattering approaches on that front. Our children are both through the school and at university now, but they have both told me – unprompted, as I certainly have not discussed it - that if I were to leave Ellesmere they would regard it as an act of gross betrayal. However, they can rest assured that I am totally committed. Ellesmere is a fantastic community and it really is not possible for me to imagine finding a better set of people to work with, be it governors, staff, parents, pupils or former pupils: I enjoy my job enormously. Next September I will start my 18th year in the College and will move into second place in the long-service rankings for the 13 Headmasters at Ellesmere so far. The longest serving Head completed 26 years, and I hope to work here for another 18 years until I am 70 and therefore beat that comfortably – health and governors, permitting of course.