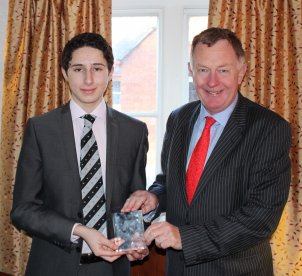 The first Silver Cross Academic Scholarship was awarded to Benjamin Hall. Created by Alan Halsall, Old Ellesmerian and owner of Silver Cross, the famous Nursery and Pram brand. Alan was delighted to support such a commendable scholar as he articularly wanted to bring to the College an academic student who would otherwise not be able to benefit from an Ellesmere education. Alan awarded the scholarship at a special lunch hosted by the Headmaster, Mr Brendan Wignall and attended by Ben's parents who commented "we were thrilled at the opportunities afforded Ben, we always thought this type of education was beyond our reach, but due to the generosity of 'old boys' such as Mr Halsall we have seen Ben flourish at Ellesmere College."

Ben joined Ellesmere from the Corbet School in Baschurch, where he was Head Boy. Due to his exceptional academic results, he was awarded this, our first corporate scholarship, The Silver Cross Academic Scholarship 2011 to 2013. Ben completed his Gold Duke of Edinburgh award whilst at Ellesmere and also represented the College in the 1st XI boys' Hockey team. He took centre stage in many of the school productions including a memorable performance in the House Plays competition. he also organised and participated in a sponsored walk in aid of Save the Children. Ben really did grasp the opportunity with both hands and made the most of his time at Ellesmere. He is now pursuing his dreams by studying Medicine at Liverpool University.

The Silver Cross Academic Scholarship, was awarded for the second time to an outstanding academic student, Dominic Kular, who joined Ellesmere College from Lakelands after achieving exceptional GCSE results. Alan Halsall, owner of Silver Cross Prams PLC and an Old Ellesmerian, funded and mentored OE Ben Hall for the last two years. "I believe it is important to give something back whenever you can. As a businessman, I'm always looking for a good investment and Ellesmere College has played a part in my success, therefore I'm delighted to invest into Dominic's future, as I was Ben."