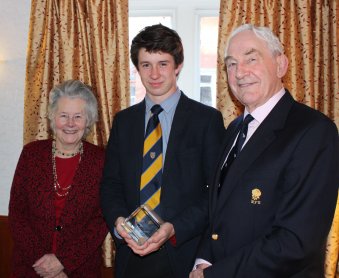 Mr Ian Beer CBE, returned to Ellesmere College where in 1961 he was a very young Headmaster at just 29 years old. 1969 he went on to Lancing College and then to be Headmaster at Harrow from where he retired in 1991.

Ian, having played rugby for Cambridge University and internationally for England, has remained passionate about the game and so on the occasion of his 80th Birthday, Nick Pettingale, Director of External Relations, launched the Ian Beer Rugby Scholarship as a gift from the staff and 'old boys' of the school.

The first recipient of this scholarship was Colin Dickson. Whilst studying for his GCSE's Colin was selected to represent England in their U16 team. The scholarship enabled him to continue his studies in to Ellesmere's Sixth Form. His father, Alan commented "as a rugby scholar at Ellesmere College, Colin has developed, academically, socially and on the rugby pitch - he has achieved far more than we dared ever hope for and the award of the prestigious Ian Beer Rugby Scholarship offered him the opportunity to continue into the Sixth Form and, with continued hard work and good fortune, to build on his achievements, he has made us very proud of his achievements, both on and off the field."

In 2013, this scholarship was awarded to Mathew Kinney, a talented young Rugby player and member of the elite Ellesmere College Rugby Academy. Mathew is a credit to the school and an all round sportsman representing the College in both Rugby and Cricket.